Commercial vs Residential Properties in a Recession

Even before the global pandemic of CORVID-19, experts predicted an economic downturn for the markets in the US. A situation that can make investing in real estate right now seem like a risky business.

In fact, the evidence suggests that while investing in residential property during a recession may be unwise, the same is not always true for those choosing commercial property investment. A topic that will be discussed in more detail below.

The Decline of Residential and Commercial Real Estate in Recession 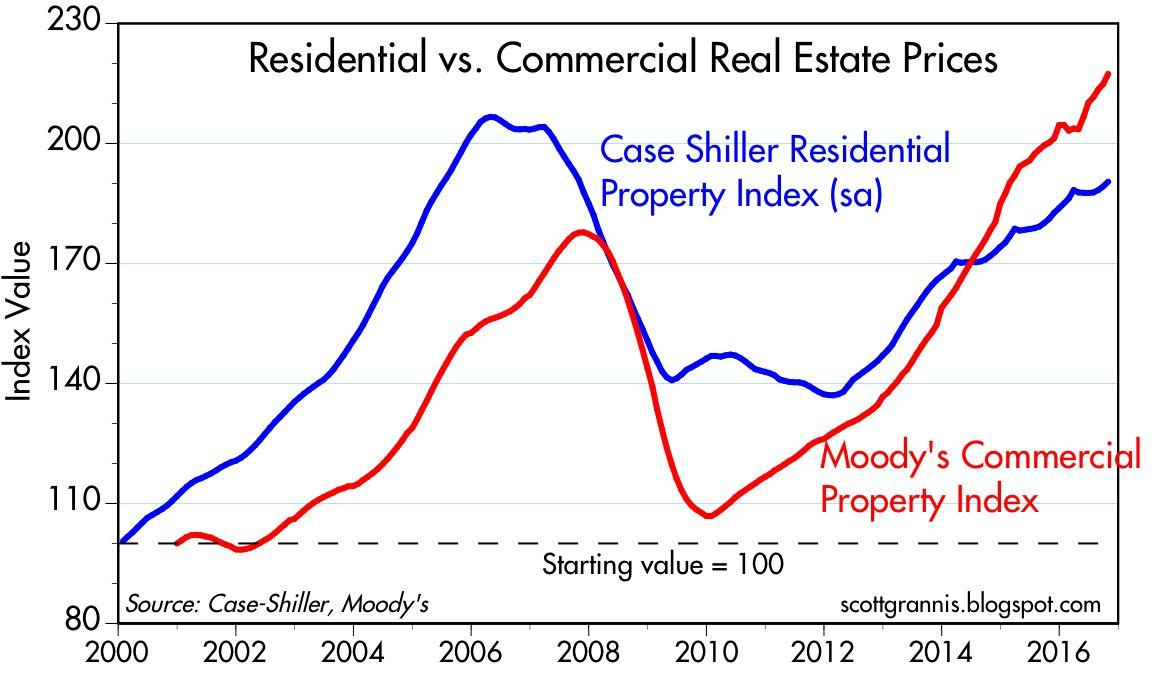 As you can see from the chart above, residential property prices started to fall before the 2009 recession, stayed extremely low from 2009-2014, and had not yet returned the short high they experienced between 2006 and 2008.

However, the decline was not felt so soon in the commercial sector. In fact, prices did not start to fall until the 2009 recession hit. Additionally, while they fell fast, the lowest trough was brief, and prices began to rise quickly.

In fact, as you can see in the graph above, prices returned to 2008 by 2014 and then continued to rise steeply after. Something that means commercial property investment retained the potential to be profitable even during a time of recession.

In fact, to further explain this phenomenon, it is wise to remember that not all types of recessions are equal.

Actually, there are various types of rescission, some of which can be a lot longer and harder than others.

For example, an L-shaped recession is particularly bad news. The reason is that it consists of a sharp drop in market prices followed by a long, drawn-out depression period, an example of which was the Great Depression.

A U-shaped recession isn’t quite as bad, though. The reason being that it will consist of lots of smaller peaks and troughs as the market attempts to right itself before it finally succeeds in coming out of depression entirely. This being the type of recession that the residential market went through from 2009.

However, a V-shaped recession may arguably be the least impactful. This is because it contains just one drop and then a rise that happens just as fast. In fact, this is how we can describe the commercial real estate recession of 2009 onwards.

Something that demonstrates that while commercial property investments are not immune to recession, they are likely to experience it less severely than those in the residential sector.

Of course, recessions are complicated things and cannot be solely explained by the models above.

In fact, the idea of boom and bust recessions also comes into play here. With many experts agreeing that the capitalist system in which real estate investing works being prone to alternating between economic growth decline.

In fact, even before the CORVID-19 crisis, economists we’re predicting a shift to an economic decline. Something that was just sped up by the pandemic. Therefore, commercial property investors that already had this in mind, the effect of the coming recession may not be great.

However, some argue the COVID-19 crisis is not the problem, but that the real issue is a balance sheet recession rather than a boom and bust one. That is, one that happens when individuals or companies prioritize paying off private-sector debts, over investing. Something that can cause economic decline and so can impact the real estate market, whether COVID-19 happened or not.

While a depression, any period of sustained economic downturn. In fact, a depression is more severe than a recession because of its extended nature. This means that if we end up in a long term depression due to COVID- 19, it could be some time before things return to normal in the property market. A fact that all real estate investors will do well to factor into their decisions.

This relates to the question of which type of property is more COVID-19 proof, because supply-side shock impacts are most likely to be felt in the manufacturing industries. Of course, this may mean that commercial properties related to this industry aren’t the best investment right now. But that other types will mostly avoid such issues and are still well worth your consideration.